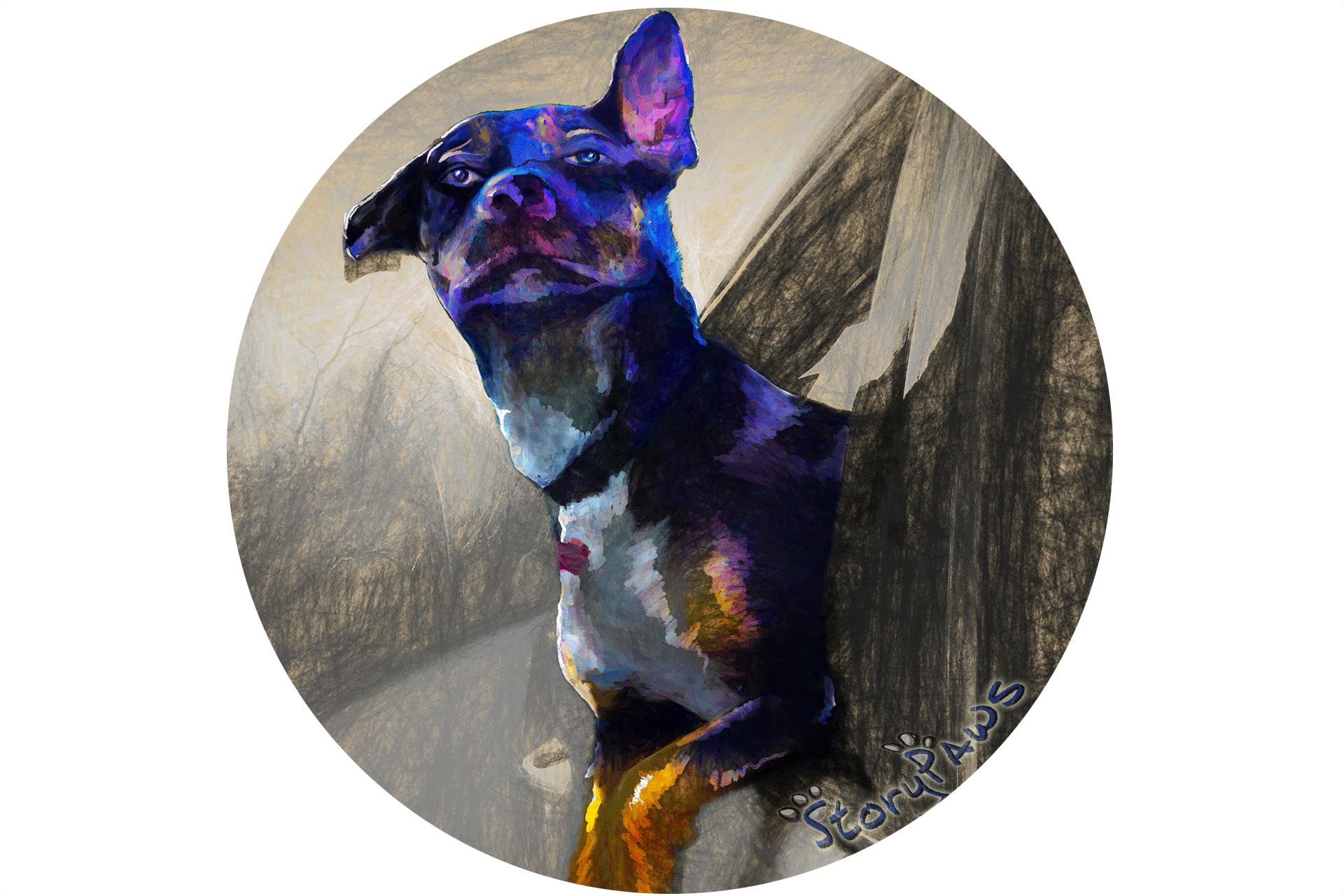 My name is Gia,

and I was born in a tiny little town called West Memphis where often I got mistaken for a tiny mean Terror, or even worse - A little brown bean.

Even though my original family loved me in their own way, I still am afraid of red brooms, and, I find it curious how mailmen and very large people sometimes run from me on walks. If only they knew, I think right now, how easily they could send me scampering back to my mom’s car, if they just pulled out a broom and began sweeping.

My original family had to give me up, and for a few days, after the other dogs and cats in the shelter they left me at, told me about Death - I grew small. Even smaller than I look. I didn’t want to die, but when you’re trapped inside a cage and all your friends are yelling and crying because they’re all trapped, too, … Sometimes Death is all you think about.

Even though, however, I am tiny, even the big dogs in the shelter would sometimes cuddle near me, even asking if everything would be okay. “Of course it will,” I told my Bestie, Socks. “If we’re able to worry, then we’re able to hope.” Socks wasn’t there the next day after I told him that, and later Dazzle, this Dalmation mix, told me that Socks left with a family who Dazzle could smell through the crack in the big steel door outside our cages, the one we all stared at from time to time, with the warm light glowing through from the other side.

I have to admit, I felt pretty hopeless though at times, and even though my days weren’t as long in the shelter as some of my other friends - It felt like an eternity.

Then, one day, I woke up amidst all the howling and screaming of my friends, but I had a sense of something different. I couldn’t tell if it was good or bad, because honestly, when you’re imprisoned like I was, you lose the ability to know sometimes what a good feeling really is, and what a bad feeling is. So I just went with it. I’m a tough girl, Socks had always told me. So no matter what this strange feeling was, I would just face it, and even if it meant that pretty word they use for killing you, ‘Euthenasia,’ I wouldn’t let them see me cry. Even if today was the last day I would see my friends, even in here, this cold steel place - I would spend the rest of this strange-feeling-day with a smile on my little brown face.

As I worriedly suspected, on of the assistants came to my cage, and put their lasso around my neck. I was taken into an exam room, I was taken to be seen by several humans I didn’t know, they gave me a biscuit, which I suspected was my last meal. Thinking of Socks, I ate it, knowing he would be so mad at me once we get to Heaven, for ever turning down free food.

Oddly, after I ate that biscuit, got very tired, and blacked out. I don’t remember feeling at all tired, but I couldn’t keep my eyes open in the little caged-suitcase like box they seemed to stuff me in. I drowsily remember being lifted in my caged-box and all, being put in a backseat of a car, the engine starting, and then, as if a dream could be seen like rolling dark clouds in a West Memphis sky, the darkness came.

“GIA!” someone screamed. I was totally freaked out at first. I couldn’t even recognize the place I suddenly found myself in. Was I dead? was the first thought that crossed my mind. My eyes were crusty, which made me naturally suspicious that this wasn’t Death because I don’t think we get eye boogers in Heaven.

Freaked out now sorta’ bummed out because if I was dead, at least I’d get to see Socks again even if I had to wait awhile. My head was spinning. I think I accidentally showed my teeth but I honestly didn’t mean to. I just wasn’t used to being on such a soft and fluffy couch after what seemed an eternity of cold concrete, cheap plastic mats, nooses, and steel bars and cages. And the howling. The howling.

“Gia HI!” this voice grew louder. As my focus came back to me, I saw the most beautiful face of someone I had no idea who they were, or why in the world they kept screaming my name. But there was a feeling I had, something I’ll never forget, because it was the first time in my life I’d ever had that feeling, EVER, in my entire little life. Seeing their face, even though we’d never met, filled me with this calmness, this tenderness that made my front paws unclench, I felt my skinny little belly even relax deeper into the couch. Was that a little wiggle of my tail even?

Seeing their face filled me with this feeling that everything bad in life was over, and I never had to worry, ever again.

Then, they hugged me.

I hate hugs from strangers. I only mention that because this was the first time I didn’t show teeth. In fact, I sorta’ felt like a little piece of chocolate, wrapped up in their warmth, kinda’ on the verge of melting.

“I’ve been waiting for this day Gia!” this human lady told me, with such a bright and beautiful smile on her face. It was all so new to me, I couldn’t really understand what she meant because I didn’t know what day it even was. All I knew was I was hungry, and kept swallowing the chewy treats she held out in her hand and eagerly listening to her talk.

“We’re gonna go to Shelby Farms! Are you excited?” I swallowed more treats. I was still in a very intense daze filled both with memories of West Memphis, smells and odors from the Caged Place still on one of the leashes in the other room, and now, this wonderful person who kept smiling at me, giving me free treats and speaking my name so sweetly, without giving me that feeling like I was going to get a shot in my butt.

We went to this place she kept saying, this Shelby Farms place, that same day. We got there a little late, but i didn’t sit in the car - I bolted out and ran and played with this new human for hours and hours it seemed. We met other humans and their dogs. I wanted to run and play with these dogs so bad, and honestly, I think I did a good job.

I took all their sticks and caught all the balls other humans were throwing, making sure not to give any of them back to anyone except my human. I kept wondering why she kept apologizing to other humans and giving back all the sticks and balls and a frisbee I worked so hard to win for us!

On the ride back home, we both watched the sunset going down, and I saw a spot on her lap that just about the size of me. So I jumped in it.

I never thought the word mom, or even Love, before, in my whole seven months of life. I don’t know if I was more startled by how wonderful it felt feeling all cozy and snuggly in a loving human’s lap while watching the sunset, or feeling that I had a mom, for the first time, in my entire life. 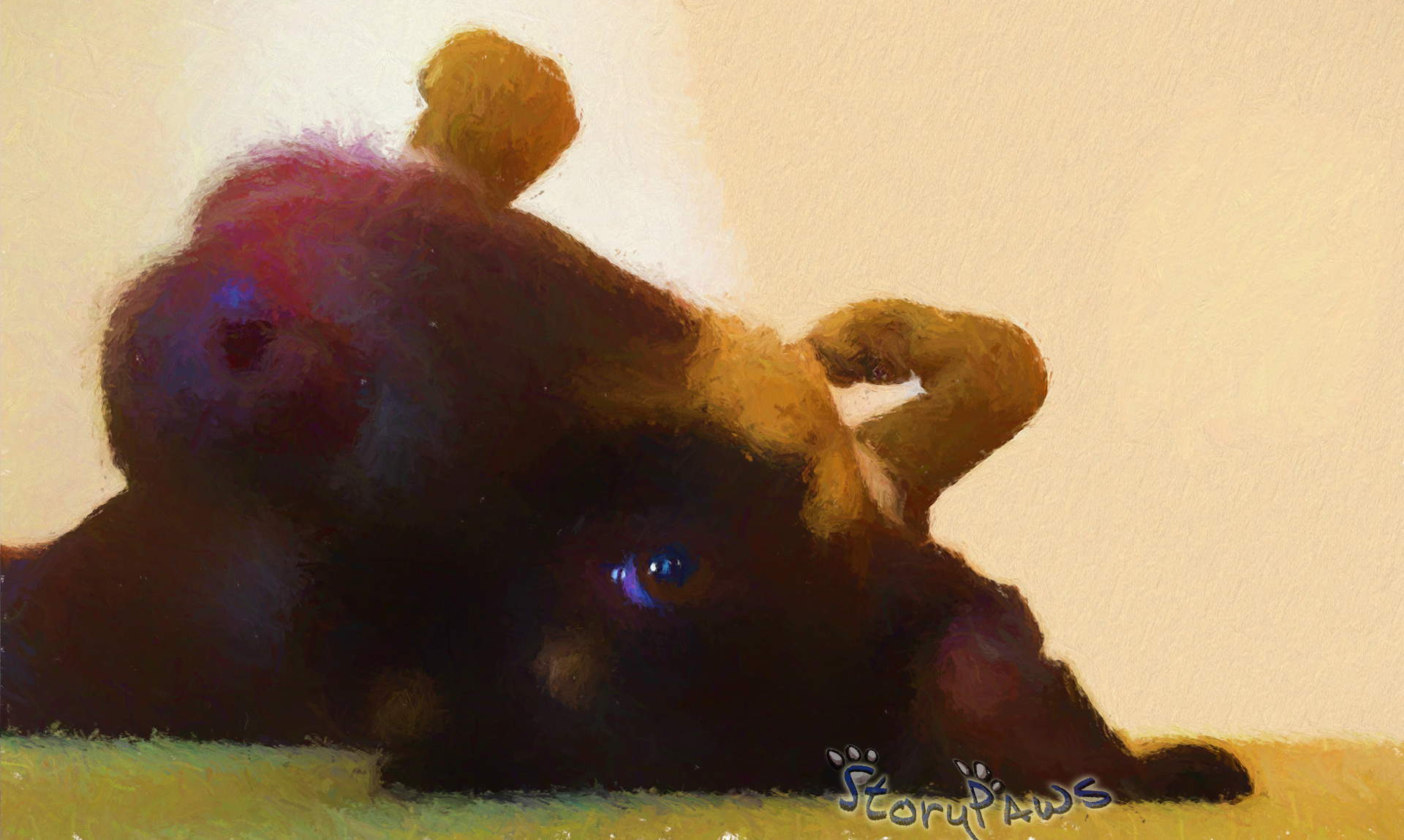