My name is Snoopy,

I am a rescue Beagle sent from Heaven to teach my mom that her visions are true, and that love between all creatures truly is, real.

I had a very magical life before I met my Forever Mom. As Fate would assist my Spiritual Mission, I didn’t have to worry about how I spent my youth, because, I was, literally, on a mission from God.

So I decided to live it to the fullest. As a little Beagle, yes, I had to endure the names and references to cartoon characters I didn’t recognize, but my small size and this particular appeal everyone seemed to have with this cartoon dog someone once drew, won me a lot of treats, snuggles, and a lot of attention during my childhood.

But my spirit was always restless. I remember vaguely hearing one of the people who raised me with the rest of my litter-siblings in Amarillo, Texas say, “This one has real hutzpah! I don’t know if he will sell!”

Sell what? I thought. I remember thinking ‘I HATE selling,’ even though I didn’t even know at that age in my little baby Beagle life, what selling even was.

A few years later, at some train tracks in South Dakota (yes, for a stint in my adolescence I did jump trains AND travel in box cars with Scrap and Hondo, my always and forever Street-Besties), I learned what selling was while the three of us had found a stopped box car and jumped in.

Safely huddled inside this steel train car, we met a homeless man already parked far on the other side, and since the train had already begun moving, we already knew our best odds were to lay low, keep quiet, and let’s just play this whole ride out without a fuss along the deadly steel tracks.

And then, exploding in our nostrils, was the undeniable odor of delicious, tasty oily scrumptious fish. The old guy in the far corner was a goldmine. A potentially lethal goldmine, but one that Hondo’s starving head just had to poke it’s way out from underneath our tarp, and reveal itself to.

Before long, this homeless man was giving us each little bites of kipper snacks. “I bought this whole box of Kippers,” he suddenly blurted out, with Hondo Scrap and me all looking at each other like, ‘he’s talking to us?!’ looks on our snouts - The human continued, “for just helping that manager sweep his floor.” The homeless man continued muttering.

“If he’d sold ‘em to me it would’ve cost me two days work. You three are part of the miracle, cuz I think I got way too much fish to carry on these tired legs.” I nor Scrap or Hondo could really see his legs, not that we even tried, each our oily smelly snouts biting gently for each morsel of fish he just kept handing out for any of us to take.

And he kept reaching into this big box, which honestly, was almost half the size of Hondo, and opening yet another can, grabbing it firmly with his left palm and peeling open the lid. The box had these big letters on it, C, O, S, T, C and O. Each time one can of Kipper Snacks was done, I couldn’t imagine having another bite of fish in my mouth, and then - Out came another can.

I looked oddly at Scrap and Hondo who were about two or three times my size, and they kept shoveling Kipper Snacks in their mouths as well. We normally avoided humans, but there was something about this homeless man that disarmed us completely. Even Scrap, who we both knew had some sort of hurt in her past she didn’t even tell us about, had rolled over on her back next to this man, after we were totally stuffed, bouncing along the South Dakota plains watching the sunset, and let this most peculiar human lovingly pat and rub her furry, no-longer empty, Chow belly.

Hondo and I briefly between bites, looked at each other in amazement.

Even though I wasn’t originally destined to be a homeless, boxcar-hopping Beagle, nor was I destined to be one forever - I WAS one right at this very moment. And homeless dogs, especially the wandering kind, know when things are ordinary, and when they’re miraculous. So with a belly full of fish, and I recall a chunk of stale bread in his sack too he shared with us, Hondo and I decided to let our guard down.

For that one last hour, a homeless man, a Chow, a Rottweiler mutt, and a wayward Beagle all sat on a hypnotically clickity-clacking boxcar watching the South Dakota sunset fade into the most beautiful indigo and magenta ocean of stars I think I’d ever seen.

I realized then, what selling was. The homeless man’s words came back to me in my Beagle mind. My original family wasn’t saying that I wouldn’t be good at selling anything! They meant, no one would BUY me.

Because of my HUTZPAH.

Even though I to this day don’t know what a hutzpah even is or if it exists, at that very moment, on that overstuffed-with-fish, boxcar-sunset night, with a belly full of Kipper Snacks - I suddenly knew that I had chosen right, to dig underneath that fence, a year earlier, and run away from whoever was intent on selling me.

All our takes are different. Hondo and Scrap since had made mutterings at times of being, ‘Worth a Kennel.’ That’s homeless dog speak for wanting or thinking that you ought to be valued enough that humans will pay money for you. And, quite frankly, I understand money now, and my take on it isn’t as bleak as it once was in my youth. But it took a few more cloudy train rides, if I can call it that, to teach me those lessons for another story.

Before I died, I got to complete my mission I told you about earlier, and it was only after the last chapter of my homeless Beagle life, that I fully understand how Heavenly Pawed missions will make sense of your entire dog life, pawprint by pawprint, only after they’re complete. Only after every treat has been gotten and savored, only after every walk, every snack, every car ride, and yes, even after every scary wandering-night - Will all our moments in life be seen to be perfectly part of such a Bigger Doggie, plan.

Even though the last chapter of my life felt like it would last forever, while I lost Scrap and Hondo down near St. Mary’s and Main street in this little town I think they call San Antone, (that’s in Texas) - Everything was about to change for me.

After hours of walking and walking, sneaking up on porches and grabbing whatever morsels of some wet food the raccoons hadn’t gotten to first, I heard the word, ‘Doggie’ and the phrase, ‘come here!?’ yelled out, albeit gently, by two voices in a slowly passing car.

Normally, I run. Especially in this San Antone town after dark. And most especially, in October. You see enough as a dog, and especially as a tiny dog, that you don’t spare a second thinking of the positives when you’re on the streets like that. But there was something different about these voices. First, they were being said by two different people, two youngish men, or maybe boys, I couldn’t tell. There was something different about their voice I rarely, but had occasionally noticed.

Dog’s minds, people don’t often know, think much faster, more instinctively than humans who a lot of times are so busied by what they call the ‘hustle and bustle’ (again, I’m clueless), of life, that they always need to question and doubt what they instinctively feel.

My instincts and feelings, right then, told me instantly when I heard these two boys calling toward me, that they had a good mom. I thought of Hondo and Scrap one last time, while in the darkness I allowed the hands of one or both, I honestly don’t remember, of these two boys, to gently lift me up from the side walk, and while one of them held me gently in his arms then lap, in the backseat, the doors closed, and the car began to drive.

What was most strange about that night, that very moment, was that my heart wasn’t racing. Hondo Scrap and I used to remark on that very thing when we’d occasionally discuss if miracles were real. Scrap once said, ‘Well all I know is it’d take a miracle to let a stranger touch me - My heart’d explode!’

There was something about the calmness of my heart that made me think of them right then, while these two boys, I thought, were driving home to their mom, and I was passengering on the strangest wings, into the next beautiful chapter of my life.

I wouldn’t be their mom we would all meet - It was their aunt. I would learn over the next year or so of my new life, having arrived at my Forever Home, of my ultimate mission, that these boys had lost their mom in a very very sad, un-answered-for death. And the person for whom I had been sent on this mission for, my now Forever Mom, was her cherished and most beloved sister.

I would live and Spiritually work with my new family, learning myself how to spot moments they were struggling and make my presence and a message known to them, amidst thousands of walks, holidays, birthday parties, and treats. My job was more amazing than I could have imagined, and lasted from that night in late October 2007, till May 23 2017, the day my earthly mission ended.

I now look over the lives of my Earth Family together with the souls of some of my newly arrived old friends, and new ones I’m constantly making. I’m still enjoying watching and sometimes visiting Scrap and Hondo, who’ve since learned to spot me when I make my appearance, now that they’re with their Forever Families, relaxed enough to pay attention to life’s invisible messages. If only every pawed friend and human friend could see from my vantage now, how beautiful a journey we’re all on - And some do, I now know. 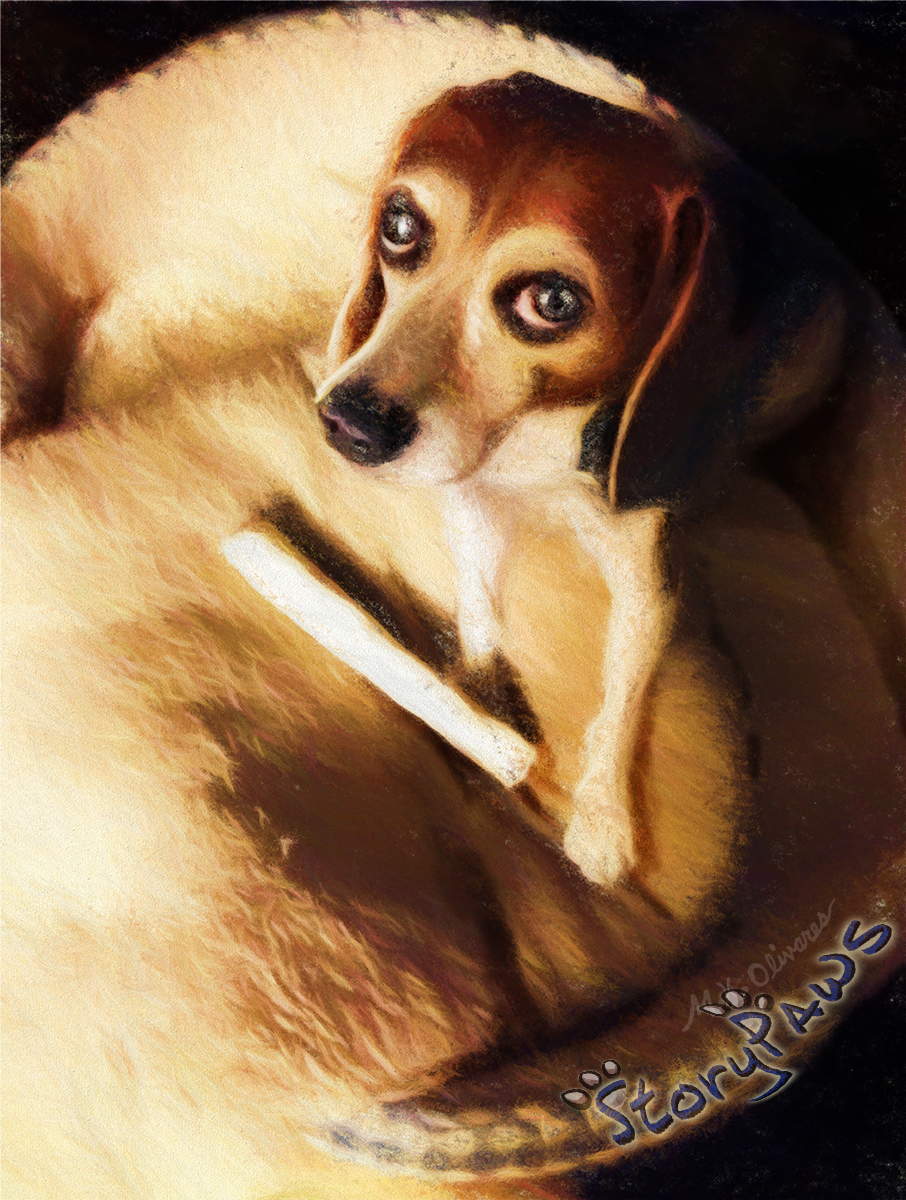